“The ceremony took a year and three days. For one year, a white stallion had to roam freely throughout a territory. So they had to protect the animal from thieves and robbers. Some sages say that the horse was a symbol, that it used to be a prince instead, but that is just hearsay. After the year had passed, there was the sacrifice ceremony. On the second day of the ceremony, the raj would ride in his chariot, pulled by the stallion and other horses. Then the wives of the raj would anoint the stallion with musk, on the head, the flanks, and the phallus, as if it was getting married. Some texts say that they had to massage the phallus to excite the stallion. The attendants would put up a tent, like for a wedding, and the chief queen was dressed as if for a wedding. Then the stallion was smothered with silk curtains, because you did not want to harm the horse or wound it, it has to be perfect. Then, while the stallion was still warm and erect, the queen had to fondle it and mount it, calling it her husband.”

“You are not suggested that she actually – ah – that she fucked the horse?” I asked, understandably horrified.

I refused to believe it, of course. So he brought me inside, and pulled two books from his dusty shelves where he kept the White and Black Vedas.

“This is the Apastamba Srauta Sutra and this is Taittiriya Samhita, they are part of the Vedas. Not ‘Vedic literatures’ like those fake swamis say – these are the real Vedas from Vyasa.”

He searched for a passage and passed me the Taittiriya Samhita.

“Can you read the Sanskrit?” he asked.

At that point, I could make out a few words, but some of them were not familiar. He scanned the page, and started reading in Sanskrit, with his deep, rich voice…

In 2013, the Vaisnava saint Sankarsana das Thakura went into samadhi. Known as both a recluse and a genuine mahasiddhi, his gurukula remained small.

In PURUSHAMEDHA, his close disciples present a collection of teachings from his master, together with contributions from other members of the sampradaya.

Transgressive and transforming, the teachings of Sri Sankarsana are of great value for all Vaisnava today.

Available now through Amazon and special order through your local brick-and-mortar bookseller.

“Most modern spiritual leaders are frauds – and with increased media and internet, we’re aware of their many, many failings. So if you worship your guru, and your guru is a fraud, this book will offend you. But sometimes offence is good. We are too sanitized, too protected, too afraid to ruffle feathers. Sankarsana used to say: see Krsna, what a little rascal! What does he do? He steals food. He kills his uncle Kamsa. He fucks pretty girls. He even fucks the pretty married girls – eh, Radha? Is Krsna worried about offending you? No, so I won’t be afraid to offend you either! Krsna is a fiend. And we need to be fiends, just like him.” – Purushamedha 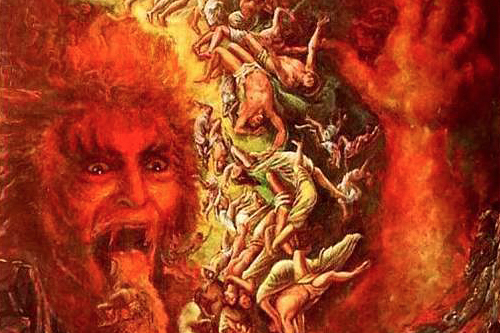 Purushamedha: Lessons with His Holiness Sri Sankarsana Das Goswami is a book concerning Gaudiya (Bengali) Vaisnavism that many mainstream members within that particular sampradaya (spiritual lineage or more specifically, chain of disciplic succession) would consider to be “sahijaya” or heretical in the extreme. Though cursory examination would seem to indicate that the subject matter is of a highly volatile nature (as indicated by the title – … [ 1161 more words. ]

An image of his namesake (Vritrasura) courtesy of His Grace Vritra Prabhu, disciple of His Holiness Rudra dasa Goswami, grand-disciple of His Divine Grace Sankarsana dasa Thakura; an anthology of the latters work, as well as contributions by various sundry disciples and well-wishers of HH Rudra dasa Goswami and acarya, including philosophical treatises and reminisces of the same, which will be published soon via the auspices of Martinet Press. In the interim, we would encourage interested parties to peruse the website of HH Rudra dasa Goswami and his disciples, “Purushamedha” (literally translated, “human sacrifice”, from the Sanskrit), select contents of which will be inclusive in the forthcoming print anthology.https://purushamedha.wordpress.com/